Caffeine is the world’s most widely consumed psychostimulant. Caffeine naturally occurs in many plant species, primarily coffee. But caffeine can also be chemically synthetized and used as a food additive, for instance in so-called ‘Energy’ soft-drinks (Red Bull, Monster,…), sports drinks, or sports supplements (tablets, capsules, chewing gums). In this blog we specifically focus on the potential use of coffee to boost exercise performance because for most coffee is the primary route of daily caffeine intake, so why not also using it to promote exercise performance?

The effects of caffeine in exercise and training are very well documented by about 5 decades of consistent research. For an excellent syntax of findings we refer to a recent consensus statement by the International Society of Sports Nutrition entitled ‘Caffeine and Sports Performance’ (Guest et al., 2021). Briefly, it is well established that caffeine can enhance various aspects of exercise performance in both individual sports and team sports. Small improvements have been found for muscle strength, movement velocity, as well as a variety of sprinting, jumping and throwing performances, but also reaction time and mental alertness during exercise. Nonetheless, benefits appear to be most explicit in prolonged aerobic exercise. Different physiological mechanisms play a role in the ergogenic effects of caffeine, yet fatigue and pain suppression via direct actions in the central nervous system probably cause most of the benefits reported. Optimal dose ranges between 2 and 6 mg/kg body weight, to be ingested 30-60 min before exercise, and yielding a 2-3h ‘active window’ after intake. This implies that in longer events (>2-3h) additional caffeine intake during exercise via a caffeine containing energy gel or ‘shot’ is needed, or caffeine is to be ingested later in the exercise to enhance performance in the final stage of the event. It is also important to note that responses to caffeine ingestion largely vary amongst individuals, mainly due to sensitivity modulation by habitual caffeine intake, as well as genetic factors. The relationship between caffeine intake and exercise performance is also characterized by an inversed U-shaped curve (figure 1), which is typical for psychoactive substances. The form of the curve is very different between individuals, and in some (individual D in figure 1) the potential ergogenic effect is marginal and not worth the risk of potentially impairing performance, indeed. In the same context, the administration of an identical caffeine dose to all players in a team is miles away from ‘best practice’. Thus, well-tuned individual dosing is pivotal. But do we know the caffeine content of our favorite coffees? 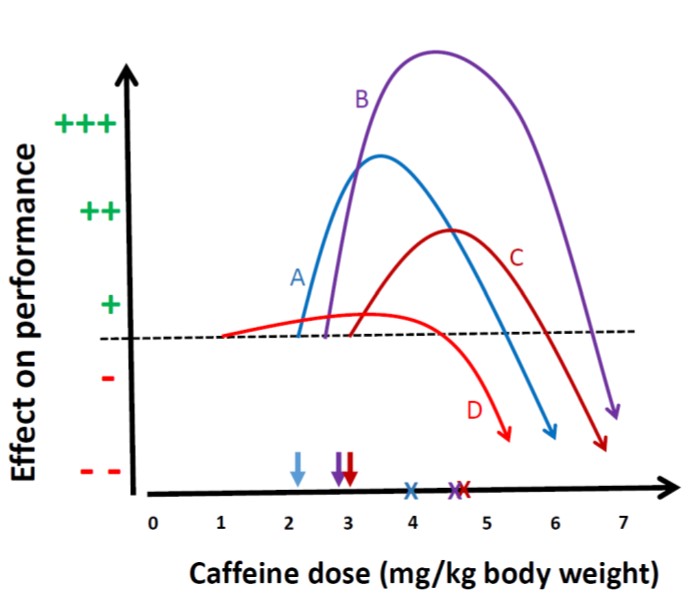 How much caffeine does my daily coffee or pre-exercise coffee deliver?

Let’s answer that question starting from the caffeine content of a typical ‘espresso’. For instance, one study looked at the caffeine content in about 100 different espressos served by Australian baristas. Mean caffeine content per serving was ~100 mg, yet with a range from ~25mg to >200mg. Want to know the caffeine content of your favorite coffees? Then scroll the following website: https://www.caffeineinformer.com/the-caffeine-database. But even values appearing in this database are no more than rough estimates. The blend of beans and amount of ground coffee used, the preparation procedure applied, and of course the volume of your cup, eventually determine the magnitude of the caffeine bolus received. Even a supposedly identical cup of coffee may deliver different amounts of caffeine from day to day. In contrast, supplements in the form of chewing gum, gels, or tablets/capsules deliver exact amounts of caffeine indicated on the product label.

It’s all about dose, not about source

One could logically ask the question as to whether one milligram of caffeine contained in your espresso is equivalent to 1 mg of caffeine contained in either a caffeine tablet/capsule, a liquid ‘energy shot’ or an energy gel, or a chewing gum. For sure, whenever evaluating the effect of a caffeine containing supplement on performance, one must also consider the other ingredients present in the supplement. Coffee, besides caffeine, contains a wide spectrum of bioactive substances, primarily phenolics and compounds responsible for aroma, flavor, and sensorial properties. A number of studies have compared the effect of pure caffeine versus an identical caffeine dose delivered via coffee. Based on available findings it is reasonable to conclude: ‘yes’, given dose of caffeine via coffee is equivalent to an identical dose of pure caffeine ingested via a capsule or a tablet. Thus, not the source but the dose is key. Accordingly, decaf coffee doesn’t work at all because the caffeine is simply missing…

I am a coffee addict: can I still benefit from coffee or caffeine intake to stimulate my performance?

It is the prevailing opinion that consistent daily caffeine consumption, either via coffee or another source, decreases sensitivity/responsiveness to caffeine, which in turn downregulates the potential ergogenic actions of caffeine in exercise. In this regards it is often being suggested that a ‘detox’ period prior to an exercise event is needed in order to make the caffeine shot work again. However, there is no strong scientific evidence to support such concept. Studies comparing caffeine effects in habitual versus non-habitual caffeine users have yielded equivocal results. However, literature data taken together indicate that consistent daily caffeine intake does not preclude your performance still to benefit from a caffeine supplement. In fact, caffeine withdrawal in the approach of an important event is to be strongly discouraged because if caffeine is a big part of your daily diet, then taking it away can have a host of unpleasant side-effects (headache, sleeplessness, fatigue, mental depression,…) that eventually may impair your performance. In addition, on the mental front the believe of ‘missing the caffeine’ is likely to be ergolytic.