Nitrate in food: from ‘foe’ to ‘friend’

Nitrate is a primary carrier of nitrogen (N) in nature, and attention to nitrate in the press is often negative. Excessive use of nitrate-rich fertilizers in agriculture and horticulture is a threat to biodiversity. In addition, nitrate corrodes historical buildings via acid rain: white limestone become black, so do the buildings.
For decades nitrate also has been considered as a harmful and useless food ingredient. This reminds me of an article published about 10 years ago: ‘Dietary nitrate; friend or foe?’ (Mc Knight et al, 1999). Some vegetables such as radishes or beets, celery or spinach, but also different kinds of lettuce like rucola and cress, have naturally high nitrate content, which is very variable though. Nitrate is also extensively used as an anti-bacterial and stabilizing agent in meat products, fish, and cheese. In fact, nitrate is a normal ingredient in our daily diet.
Because of the potentially harmful effects of dietary nitrate on health, decades ago the World Health Organization (WHO) issued strict guidelines to control the upper limit of nitrate content in foods. However, more recently a number of potentially interesting beneficial effects of nitrate on human health have been identified. Thus, research findings indicate that dietary nitrate may beneficially impact some cardiovascular diseases, immunity, or intestinal function (Mc Knight et al., 1999; McDonagh et al, 2018; Alsulayyim et al, 2021; Shannon et al, 2021).

Nitric oxide (NO) in the role of ‘gamechanger’

Nitric oxide plays an important role in regulation of a wide spectrum of physiological processes in the heart, lungs, blood vessels, skeletal muscles, and other tissues (Stamler & Meissner, 2001). The American professor Robert Furchgott discovered the role of NO in the human body by showing that neural regulation of blood vessel diameter depends on NO action. In 1998, Furchgott and his colleagues Louis Ignaro and Ferid Murad were granted the Nobel Price in medicine for their discoveries with regard to the role of NO in cardiovascular regulation. In the meantime additional research has also elucidated the pivotal role of NO in modulation of blood perfusion, oxygen utilization, glucose metabolism and calcium management in skeletal muscles during contractions. 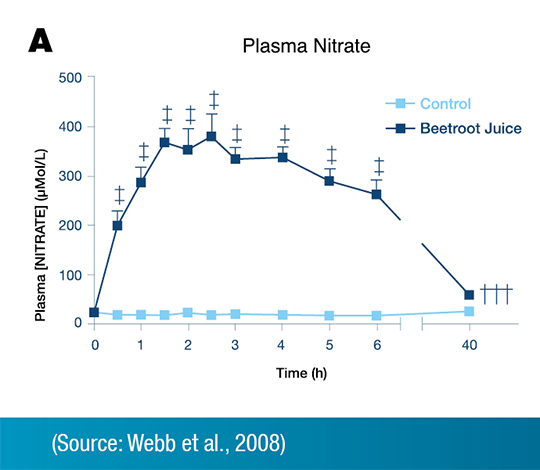 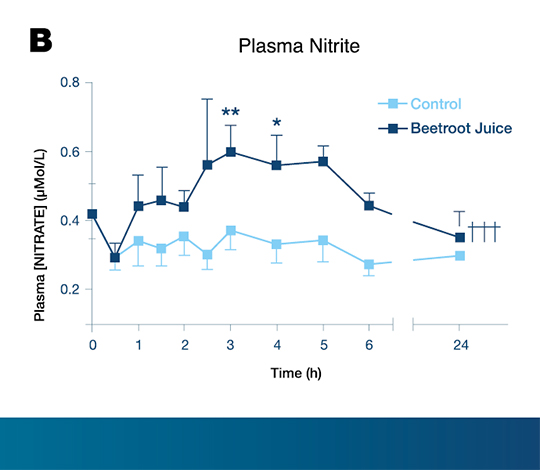 NO production from dietary nitrate in the human body

In healthy individuals NO is readily produced from arginine, the availability of which is abundant under normal conditions. However, dietary nitrate delivers an additional route for NO production. In the oral cavity nitrate (NO3) can be converted to nitrite (NO2), which in turn is a substrate for NO production. About 15 years ago it was shown that nitrate ingestion (~6 mg per kg body weight) substantially increases blood nitrite concentrations, peaking between 2h30 and 5h30 following intake (see figure)(Larsen et al., 2007; Webb et al., 2008; Bailey et al., 2009). Concentrated nitrate-rich vegetable juices, such as beetroot juice, can perfectly fulfil this role as ‘NO-suppliers’.

As indicated above, bacteria residing in the oral cavity, the so called microbiota, play an important role in the conversion of nitrate to nitrite. Hence a mouth missing this favourable microbiome fails to convert nitrate to nitrite. In this regard it is important to emphasize that mouth rinsing with chlorohexidine solutions destroys the mouth micro-biotic system. This may even negatively impact cardiovascular health, a.o. by increasing blood pressure (Bondonno et al., 2015). As a consequence, nitrate-rich sports supplements are meaningless in individuals using chlorohexidine mouth rinsing. Depending on the frequency and duration of chlorohexidine utilization, repair of the mouth microbiota can take weeks to months. Chronic use may even cause irreversible deterioration.

Since 2007 (Larsen et al., 2007) extensive research has looked at the effects of nitrate supplementation in exercise and training (Jones, 2014). Prof. Andy Jones from the University of Exeter (UK) was the opinion leader of this research. At the same time he contributed to the ‘Nike Breaking 2’ marathon record-attempts by Eliud Kipchoge. No doubt that he truly justified his Twitter-name ‘Andy Beetroot’…
To date it has become well documented that nitrate intake can beneficially impact muscle fibre contraction via different mechanisms (Jones, 2014).  During sub-maximal exercise, for a given rate of oxygen consumption (VO2) muscle fibres can produce higher power output due to higher efficiency of mitochondrial oxygen utilization. During maximal exercise, improved calcium fluxes in fast-twitch muscle fibres probably may allow for higher power outputs to be produced. In addition, higher NO availability due to nitrate intake conceivably facilitates blood flow in active muscles. Taken together, based on the above mechanisms of action, one may expect nitrate supplementation to beneficially impact performance in endurance competitions, in short maximal exercise bouts, as well as in high-intensity intermittent exercise events.

Dozens of studies have clearly demonstrated that 300-500 mg nitrate intake 2-3h before exercise can be ergogenic in a wide variety of exercise performances (for reviews see Jones, 2014 and Sedefeld et al., 2020). But the effect size (~3% on average) depends on a number of factors:

Research findings published since 2007 clearly demonstrate that nitrate intake according to the ongoing dosage recommendations (see above) is safe. However, given the absence of long-term observations, caution is warranted. From this perspective we recommend to limit the use of nitrate supplements to peaking to important top performances. It is also important to mention that the flow of research addressing the effects of nitrate intake in exercise and training, also has triggered research to explore potential clinical applications. Recent studies indicate that increasing dietary nitrate intake may benefit some metabolic and cardiovascular diseases (McDonagh et al, 2018; Alsulayyim et al, 2021; Shannon et al, 2021). Clearly, the stigma on dietary nitrate is slowly shifting from a ‘redundant and harmful food ingredient’, to potentially interesting in the context of health maintenance. To be continued.